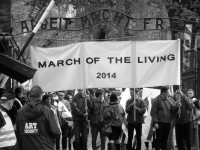 Holocaust Remembrance Day (Yom HaShoah) starts tonight with events planned around the world. Last year, my daughter Jordan participated in the March of the Living, an annual event that brings thousands of people from around the world to the concentration camps in Poland. The experience had a profound effect and since her return she has become increasingly active within the March of the Living organization including joining the Ottawa board of directors. As part of tonight’s Holocaust remembrance event in Ottawa, she was asked to create a video to commemorate last year’s trip including interviews with participants, pictures, and video. She spent hours interviewing 18 participants on their experience and worked through hundreds of photos and hours of video to create a five-minute snapshot.

Last week, she posted the video to YouTube in anticipation of tonight’s event. Within hours, she received a message from the event organizer’s wondering why so few interviews appeared on the video. When she looked into the issue, she found that YouTube had muted the audio track with interviews after a couple of minutes (at 2:14 to be precise). The reason? The video includes some copyrighted background music. YouTube’s approach when it matches audio to a copyrighted work is to mute the non-music track, though it provides an option to fill out a fair dealing/fair use claim. Jordan did that, pointing out that Section 29.21 of the Canadian Copyright Act provides specific protection for non-commercial user generated content.  The provision states: