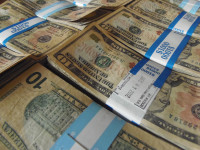 Copyright For Sale: How the Sony Documents Illustrate the Link Between the MPAA and Political Donations

The linkage between political funding and the major copyright lobby groups is not a new issue as for years there have been stories about how groups like the MPAA and RIAA fund politicians that advance their interests. Sites like OpenSecrets disclose the spending, though it gets complicated given how much money comes from individual companies or corporate executives. While those sites tell the story of how much, the recent leak of Sony emails reveal the how. They demonstrate the coordinated efforts by the MPAA to raise hundreds of thousands of dollars for certain politicians with direct efforts from MPAA CEO Christopher Dodd to solicit donations from among the Hollywood studios. This will not be news to those who have been following Lawrence Lessig in recent years, but the matter-of-fact tone of these emails is still revealing.