Funding for these films comes primarily from tax dollars with public sources accounting for $146 million or 57% of the total financing of Canadian theatrical feature film production. The total budget is small: $178 million for English-language films and $76 million for French-language films. The chart below highlights how little Canadian private sources spend on making feature films. After accounting for public dollars through CFFF-Telefilm, tax credits, and foreign money, less than one-third of funding comes from Canadian private sources. Note that this data is focused on Canadian feature film production to the theatres and does not include co-productions with other countries, which add an additional 26 productions (11 in English and 15 in French) with larger average budgets. 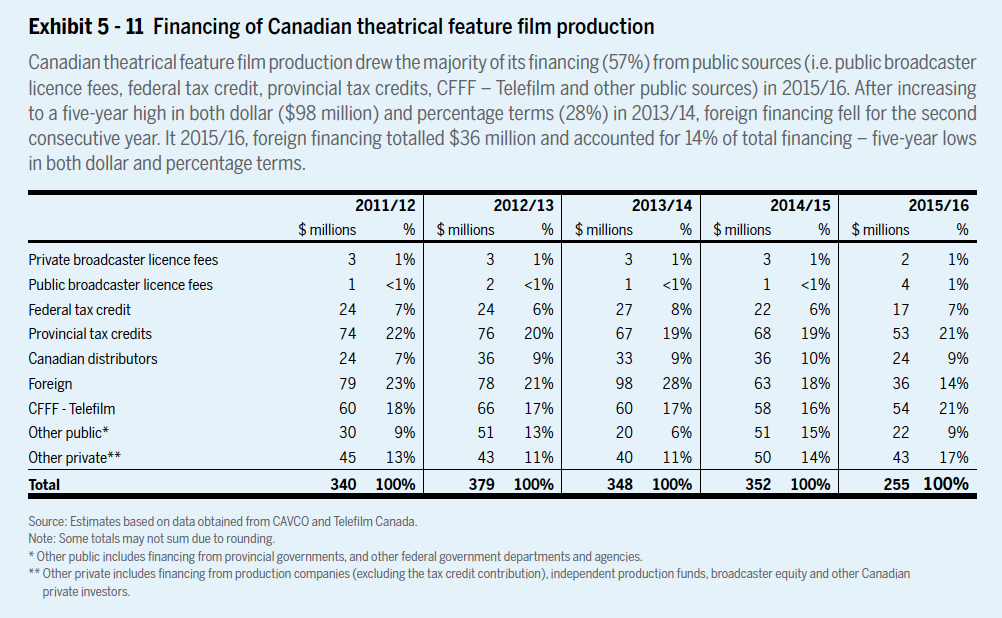 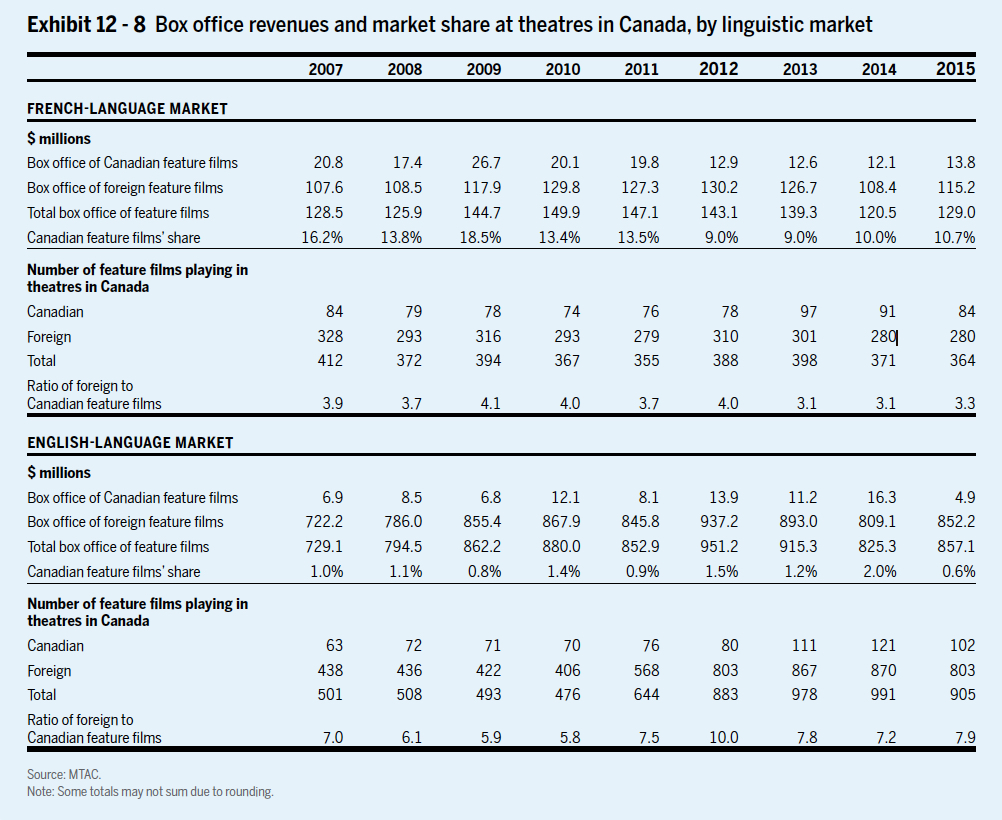 There are surely many factors behind the performance, not the least of which is the popularity of U.S. films, which typically have bigger budgets and more promotion associated with them. But if Canada deems feature film important, is willing to spend millions in tax dollars and credits to support the industry, and wants to ensure that Canadian stories make it onto the big screen, then considering other policy issues is needed (Simon Houpt did so in an excellent piece in 2015).

Topping the list of considerations might be how Canada defines a “Canadian film.” This issue was the subject of debate at the annual CMPA conference in February that was also covered by Houpt.  While the debate and Houpt piece focus on the virtues and problems with Canadian 10-point system for determining whether a film qualifies as “Canadian”, the reality is that the Canadian approach is an outlier when compared with many other countries.

I recently obtained a study conducted by the Department of Canadian Heritage under the Access to Information Act that compared approaches in ten countries: Canada, Australia, the UK, Ireland, Hungary, New Zealand, Mexico, Germany, France, and Colombia. The study noted that point systems are common, but Canada stands alone in focusing exclusively on the nationality of personnel involved in the production.

The majority of countries allow for points for three main criteria: cultural content (the cultural contribution of the film itself), production (the degree to which the film is nationally produced), and personnel. Some countries emphasize one criteria more than another, but only Canada considers a film to be Canadian based strictly on the nationality of personnel. Canada is also the only country to require the company to maintain worldwide copyright.

The report notes that Canada’s focus on process may come at the expense of cultural outcomes:

In its pursuit of cultural goals, Canada maintains a distinct focus on a process rather than outcome based approach relative to other countries being examined. The Canadian system focuses solely on ensuring the creators behind the production are Canadian. Not only do other countries have lower requirements relating to the number of key staff that must have their countries’ nationality, they also allow low scores in this category to be compensated by strong scores in cultural content and production…

When trying to achieve cultural goals, focusing on outcomes rather than process has potential advantages and disadvantages. Traditional policy literature encourages focusing on outcomes, as this is the clearest way to connect policies to the mandate of government. For example, a film made entirely by Canadian producers and key creative staff could still be based on American source material, be set in the United States, and consist only of American characters. This would not necessarily be achieving the goals of producing distinctly Canadian cultural content.

An internal presentation that accompanied the report highlighted the limitations of the Canadian approach, noting a film based on a Canadian novel, starring Canadian actors, and filmed and produced in Canada might still not qualify as Canadian if written, directed, and produced by an American. 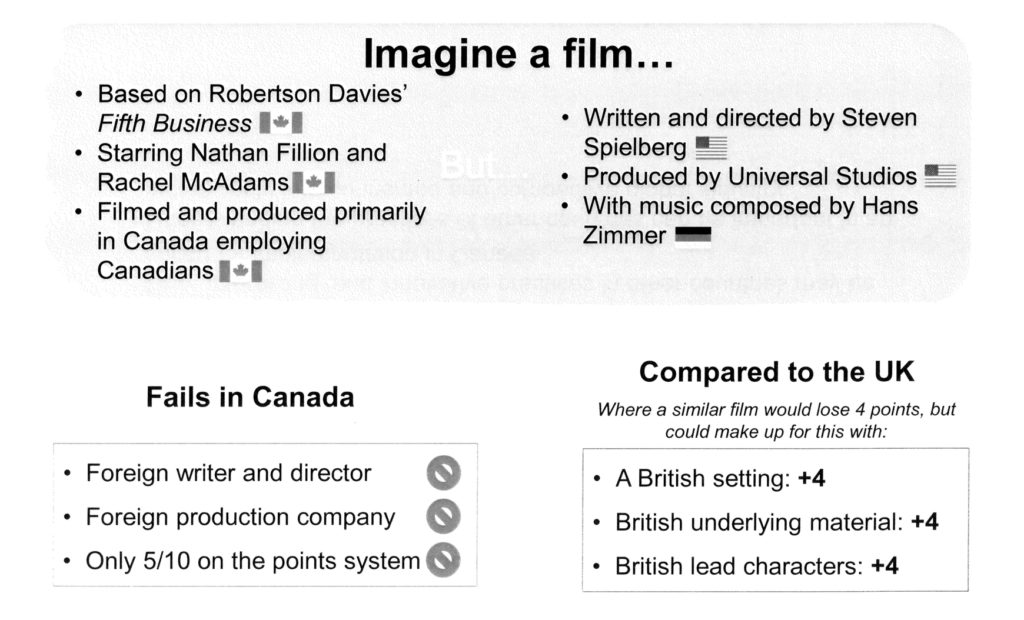 The outlier cultural approach – when combined with the financial struggles of the Canadian feature film industry and the significant public investment in the sector – suggests that it is time to reconsider the Canadian system. The Canadian industry is enormously successful once foreign location and service production is taken into account. That side of the industry – in which foreign producers use Canadian locations for filming and services – was a $2.6 billion industry with 128 feature films last year. However, the industry often cites the cultural importance of Canadian feature films, in part to justify the significant public support. If the goal of the feature film industry in Canada is primarily cultural with box office success or film budgets deemed secondary, then changing the way we measure what constitutes a “Canadian film” is long overdue.