In recent days, the issue has garnered even more attention on the political front. For example, earlier this week, the Liberals used one of their questions in Question Period to highlight their support for net neutrality in contrast to differing views from the Conservatives:

Mr. Majid Jowhari (Richmond Hill, Lib.):
Mr. Speaker, Internet is not a luxury but a necessity in today’s world. While it is important to invest in infrastructure and support access to Internet service, we also need to maintain equal access to information provided to it. We need net neutrality. Just this past weekend, the member from Beauce said we needed less net neutrality and the member for Parry Sound—Muskoka said he disagreed. It seems the official opposition cannot take a position. Could the minister clearly reiterate the government’s position on net neutrality in Canada?

Hon. Navdeep Bains (Minister of Innovation, Science and Economic Development, Lib.):
Mr. Speaker, I was wondering if the leader of the official opposition could provide clarification on what its position is, because the member for Beauce, who is the official innovation critic said one thing and the member for Parry Sound—Muskoka says he disagrees with him. Let me be clear. Our government stands to support net neutrality. We support an open Internet. We support the CRTC framework for net neutrality, because we know an open Internet is critical for our economy and our democracy.

The reference to Conservative discord on net neutrality stems from a Maxime Bernier tweet expressing support for an anti-net neutrality column, which elicited the following response from Tony Clement: 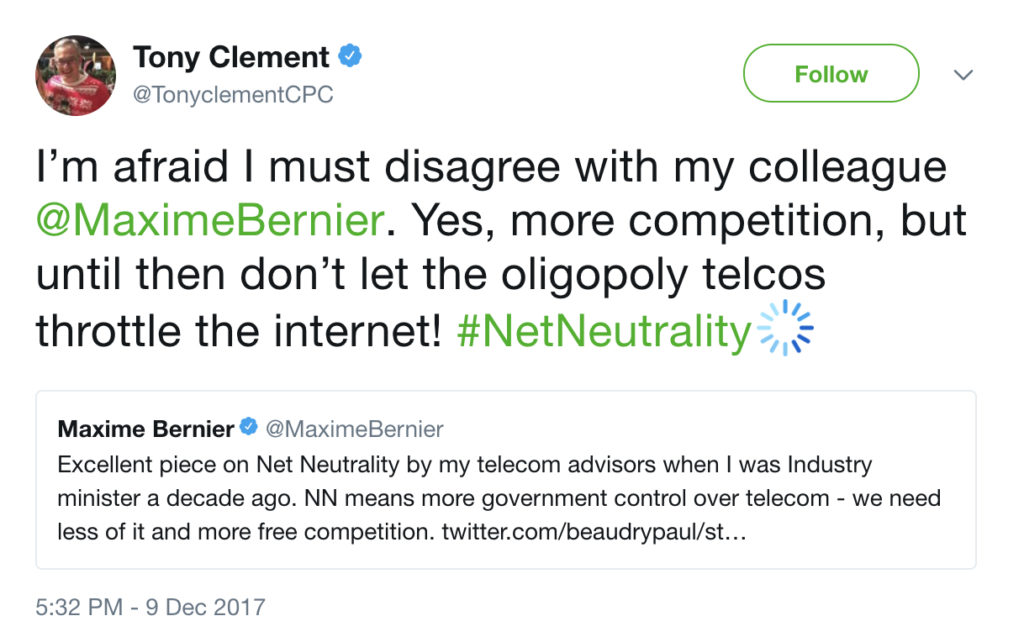 The Bernier position is not particularly surprising, given that he has long argued against active telecommunications regulation. The Conservatives have yet to articulate a single position, but Bernier’s telecom policy approach was an outlier for the vast majority of the Harper years. Given their previously aggressive approach on telecom policy, it would be a surprise if they abandoned support for net neutrality.

Lost in the discussion was strong net neutrality support from the NDP, with MP Brian Masse tweeting several weeks ago: 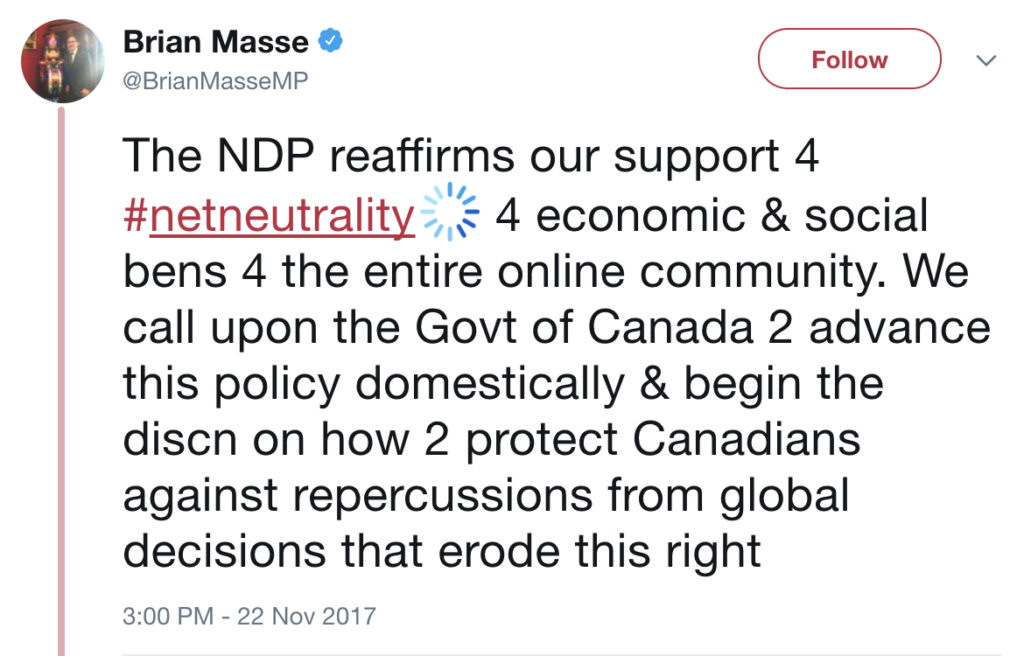 As the U.S. heads toward a period of uncertainty – the net neutrality rollback is likely to be challenged in court and the political pressure to affirm support in Congress in mounting – the Canadian landscape offers a sharp contrast with strong political and regulatory support for net neutrality rules.