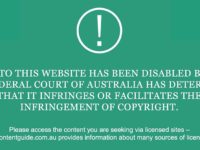 The Bell website blocking coalition unsurprisingly argues that blocking “regimes have been widely adopted internationally because they have been proven to work.” The submission cites data from several countries including the UK, Portugal, and South Korea. As demonstrated last week, the Bell coalition proposal has not been widely adopted internationally. In fact, the overwhelming majority of countries have rejected approaches that do not include court orders. Moreover, a closer look at the data reveals that website blocking is far less effective than its proponents claim.