Fair Play for FairPlay?: Bell Presented Its Site Blocking Plan to the CRTC Months Before It Became Public

The Bell website blocking coalition responded to thousands of interventions on its proposal this week, reiterating many of the same claims it has been making since it launched the request with the CRTC. While the commission should provide details on what comes next shortly, according to internal commission documents released under the Access to Information Act, the high profile public consultation only came after months of private discussions between Bell and CRTC officials on the site blocking plan.

The internal documents, obtained and posted by the Forum for Research and Policy in Communications, indicates that the groundwork for the site blocking proposal was laid in the summer of 2017, well before public filings or press reports. As far back as July 2017, Bell executives pressed CRTC commissioner Christopher MacDonald for a meeting with all CRTC commissioners and senior staff to make its case for a commission-backed site blocking system. 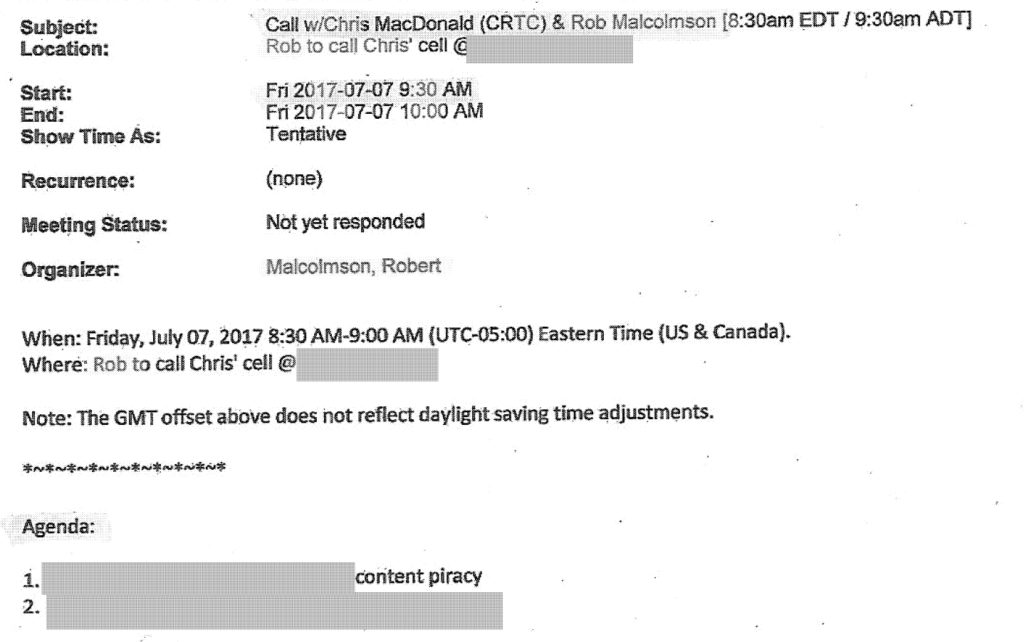 McDonald followed up on the call by suggesting that Bell be given the chance to present its proposal to the full commission without a public filing. 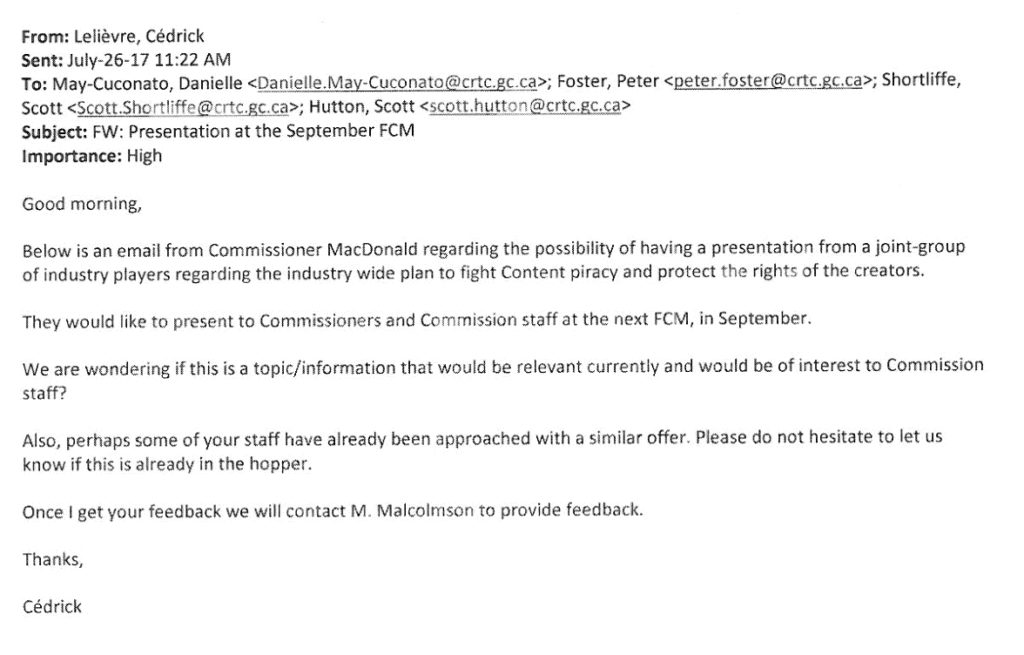 The request ultimately led to a presentation dated September 21, 2017 that provided a detailed preview of the filing, complete with policy and legal arguments supporting the proposal. Bell raised the same issue before a House of Commons committee the day before, recommending that site blocking be added to the North America Free Trade Agreement.

The presentation, titled Anti-Piracy Coalition: Site Blocking Proposal, featured only the Bell corporate logo and made no references to other coalition members. Over several slides, it argued for site blocking and an anti-piracy agency, claiming the proposal is consistent with other countries and fits within the CRTC’s mandate. The final submission months later employed the same arguments and data.

The Bell presentation appears to have sparked further action within the commission, including the crafting an internal legal opinion on piracy website blocking. Stephen Millington, the CRTC’s Acting Senior General Counsel, requested a copy of the opinion one day after reports of the site blocking plan leaked in Canadaland in December 2017.

Moreover, on the day of the formal filing, Bell provided a separate copy to senior commission officials with the email indicating the additional copy was “as requested”.

The meetings raise serious fairness concerns regarding the regulatory process on website blocking. By granting Bell a private audience with CRTC officials, the company was able present its case without counter-arguments or a public airing. In fact, without a transcript of the meeting, there will be questions about whether the ultimate CRTC decision may have been influenced by evidence presented outside the formal hearing process.

Moreover, the private meetings clearly had their intended effect with commission officials developing internal positions and analysis without a formal filing or the benefit of the dozens of detailed submissions that carefully examined the legal implications of site blocking for freedom of expression, net neutrality, due process, and the CRTC’s jurisdiction.

The concerns are exacerbated by the fact that it appears the meetings were not disclosed in the lobbyist registry. The registry references five meeting between Bell and CRTC officials between October 2017 and February 2018, but there are no reports of a September meeting nor of earlier communications.

The five meetings over a five month period is notable since it points to a significant increase in the number of meetings between the Commission and Bell since CRTC Chair Ian Scott took over in September 2017. Bell did not report any CRTC meetings in all of 2016 and the first half of 2017.

There are benefits to active discussions between the CRTC and all stakeholders. However, granting Bell a private audience for its website blocking proposal months before launching a public process ultimately feeds fears of industry capture of Canada’s telecom regulator and calls into question the fairness of a proposal ironically branded “fairplay”.