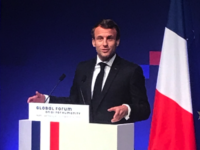 Earlier this week, I traveled to Paris to attend the Global Forum on Artificial Intelligence for Humanity (GFIAH). The by-invitation event featured one day of workshops addressing issues such as AI and culture, followed by a two days of panels on developing trustworthy AI, data governance, the future of work, delegating decisions to machines, bias and AI, and future challenges. The event was a part of the French government’s effort to take the lead on developing a new AI regulatory framework that it describes as a “third way”, distinct from the approach to AI in China and the United States. The French initiative, named the Global Partnership on AI, is particularly notable from a Canadian perspective since Canada is an active participant in the initiative and will host the next global forum in 2020.