Guilbeault’s tweets focused on three issues: mandated contributions from Netflix (ie. a Netflix tax), digital sales taxes, and a new corporate tax on technology companies. The first issue is the shared responsibility of the Heritage and Industry ministers, the latter two taxes fall within the mandate of the Minister of Finance. Last year, I wrote a series of posts on the issues (digital sales tax, Netflix tax, ISP tax, device tax, media support tax, corporate tax) and it is worth unpacking each of the taxes raised by Guilbeault. His first two tweets involve digital sales tax and corporate tech tax. 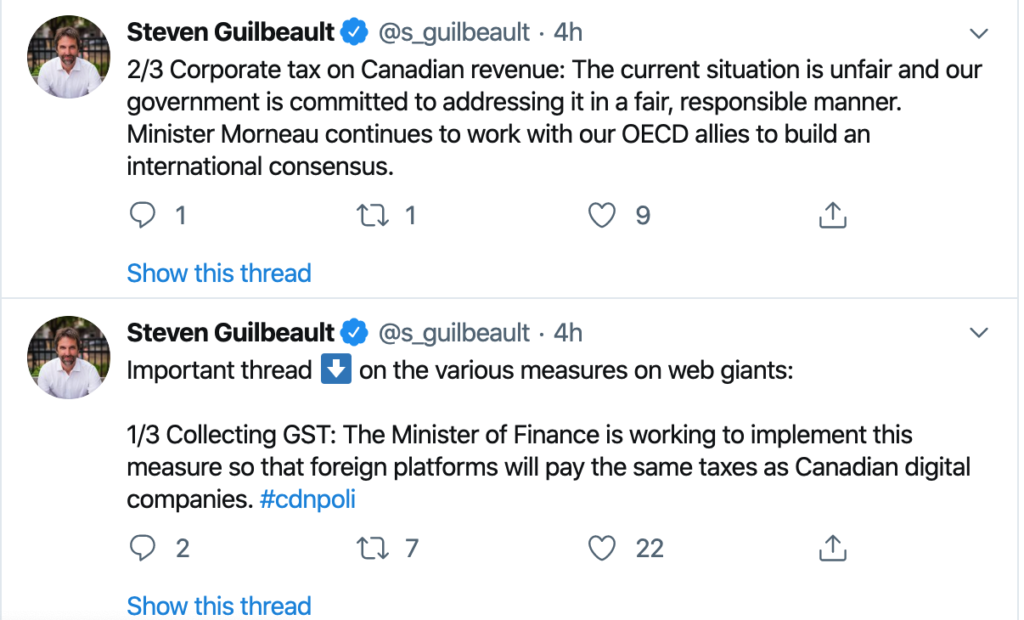 He writes that digital sales taxes will be implemented by the Minister of Finance and that the corporate tech tax will be the subject of discussions at the OECD to achieve an international consensus. Yet this gets the position exactly backward. The Liberal platform stated the following:

make sure that multinational tech giants pay corporate tax on the revenue they generate in Canada. We will also work to achieve the standard set by the Organisation for Economic Co-operation and Development (OECD) to ensure that international digital corporations whose products are consumed in Canada collect and remit the same level of sales taxation as Canadian digital corporations.

The mandate letter to the Minister of Finance mirrors the platform:

The difference is not trivial. The Canadian digital sales tax position has long been that it would only implement a system once international standards were developed. While consumers are free to self-report sales taxes on digital imports, requiring businesses with no physical presence to collect and remit sales taxes raises significant enforcement and administrative challenges. Guilbeault’s tweet suggests that the Minister of Finance is working to implement the digital sales tax when, in fact, the government’s efforts are focused on international standards.

The corporate tax issue is arguably even more important. While Guilbeault indicates that Canada is working toward a global standard, the Liberal position is actually that it plans to move ahead with a corporate tech tax. In fact, it provided details to the Parliamentary Budget Office during the election campaign for the purposes of costing the proposal:

This proposal would  introduce a new 3% tax on the income of businesses in certain sectors of the digital economy. This policy would replicate the proposed digital services tax announced by the French government. It would be implemented on 1 April 2020. The tax would target only the following services: targeted advertising services and digital intermediation services. The tax would apply only to businesses with worldwide revenues of at least $1 billion and Canadian revenues of more than $40 million. The new tax would act as a value added tax.

The PBO estimated that the tax would raise over $500 million in the first year. Therefore, far from working on an OECD-based approach, the Liberal position has been to implement the tax by the spring. If the government moves ahead as promised, the approach is likely to spark a significant backlash from the United States. Indeed, the French proposal that serves as the model has led to the U.S. indicating that it plans to levy billions in retaliatory tariffs. The cost to many Canadian exports to the U.S. could be very significant and cut across many Canadian sectors (the French retaliation will involve 63 tariff subheadings).

Guilbeault’s third tweet involved Netflix and other streaming services with a promise – reflected in his mandate letter – to work with ISI Minister Navdeep Bains to update broadcasting rules “so that web giants can offer more Canadian content, contribute to its creation, promote it, and make it easier to find.”

This is consistent with the mandate letter which states:

Work with the Minister of Innovation, Science and Industry to introduce legislation by the end of 2020 that will take appropriate measures to ensure that all content providers, including internet giants, offer meaningful levels of Canadian content in their catalogues, contribute to the creation of Canadian content in both Official Languages, promote this content and make it easily accessible on their platforms.

The specifics of these reforms remains to be seen (and the Broadcasting and Telecommunications Legislative Review Panel is not scheduled to release its recommendations until next month). While some expect a mandated Netflix contribution, that too could result in retaliation from the U.S. since the new USMCA would prohibit discriminatory fees on U.S. services and permit retaliatory measures. Given the possibility that Netflix would be required to pay into a system that it would not benefit from (unlike Canadian competitors), the discrimination provision could be triggered, leading to millions more in retaliation against Canadian goods and services. The government has actually left its itself considerable flexibility since “meaningful levels of Canadian content”, contributions, promotion, and accessibility are all undefined. Given the financial implications, it is essential that the various departments and ministers get on the same page when it comes to digital tax policy.