I appeared on the dot: Canada’s Internet Podcast hosted by Spencer Callaghan.

In the episode, we had a chat about the Broadcast and Telecommunications Legislative Review. 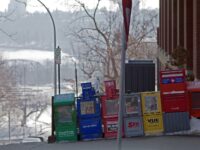