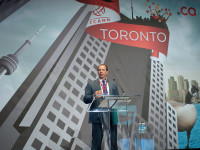 CRTC Says No To Internet Fast and Slow Lanes

Appeared in the Toronto Star on January 31, 2015 as CRTC Says No Internet Fast and Slow Lanes With the United States embroiled in a heated battle over net neutrality – millions have written to the U.S. regulator to support rules to prohibit Internet providers from creating fast lanes and […]