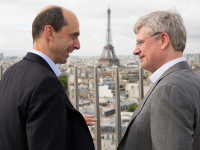 The House of Commons debate over Bill C-51, the anti-terrorism bill, began yesterday with strong opposition from the NDP, disappointing support from the Liberals, and an effort to politicize seemingly any criticism or analysis from the Conservative government. With the government already serving notice that it will limit debate, the hopes for a non-partisan, in-depth analysis of the anti-terrorism legislation may have already been dashed. This is an incredibly troubling development since the proposed legislation has all the hallmarks of being pulled together quickly with limited analysis. Yet both the Conservatives and Liberals seem content to stick to breezy talking points rather than genuinely work toward a bill that provides Canadians with better safeguards against security threats while also preserving privacy and instituting effective oversight.

The only detailed review to date has come from Professors Kent Roach and Craig Forcese. Their ongoing work – three lengthy background papers so far (Advocating or Promoting Terrorism, new CSIS powers, expanded information sharing) – provides by far the most exhaustive analysis of the bill and is a must-read for anyone concerned with the issue. Indeed, once you have read their work, it becomes readily apparent that all should be concerned with this legislation. Much of the focus to date has been on the lack of oversight and the expansive new powers granted to CSIS. However, the privacy implications of Bill C-51’s information sharing provisions also cry out for study and reform.