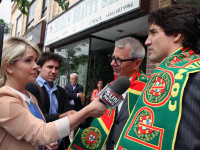 The abrupt end of the Sun News Network – its owners pulled the plug on the all-news channel without warning earlier this month – sparked considerable commentary with many lamenting the lost jobs, others examining the quality of the content, and some celebrating the end of a service that was controversial from the moment it launched. Largely left unsaid, however, is that its demise signals the beginning of a new era in Canadian broadcasting in which services are allowed to fail rather than being propped up through regulatory or government support.

My weekly technology law column (Toronto Star version, homepage version) notes the Canadian broadcasting system has long been shielded from market forces through a broad array of regulations that offer both financial compensation and marketplace protection. Those rules have been a boon to broadcasters, who have seen some services succeed with limited viewers and original content.

Appeared in the Toronto Star on February 21, 2015 as Why the Demise of Sun News Network May Be a Preview of Things to Come The abrupt end of the Sun News Network – its owners pulled the plug on the all-news channel without warning earlier this month – sparked […]