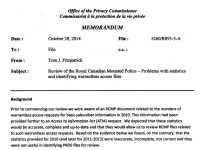 RCMP Records on Requests for Subscriber Data “Inaccurate and Incomplete”

Appeared in the Toronto Star on February 28, 2015 as RCMP Records Called ‘Incomplete and Inaccurate’ in Memo Last fall, Daniel Therrien, the government’s newly appointed Privacy Commissioner of Canada, released the annual report on the Privacy Act, the legislation that governs how government collects, uses, and discloses personal information. […]