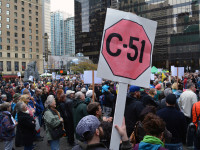 A Conversation About Bill C-51: How the Anti-Terrorism Bill Undermines Canadian Privacy

Yesterday, I had the honour of participating in a terrific panel at the University of Ottawa on Bill C-51 alongside colleagues Dean Nathalie Des Rosiers and Joanne St. Lewis (the panel was moderated by the Toronto Star’s Tonda MacCharles and organized by Carissima Mathen). My remarks focused on the privacy implications of Bill C-51, drawing on a recent column on the issue (Toronto Star version, homepage version). My opening comments are posted below.

A Conversation About Bill C-51

Thanks to Carissima Mathen for organizing this panel. It’s a great idea and given that this week looks like the final week for committee hearings, very timely.

It is hard to know where to start with Bill C-51.  So I’m not going to start with the bill at all.  In fact, I’d like to share my context for reviewing the bill and provide a far more personal take than is typical. There is good reason for doing so – if you have followed the rather limited committee hearings to date, you know that government MPs have made deeply personal comments, raising questions about the loyalty to Canada of some witnesses and whether critics of the bill believe terrorism is a threat.

Appeared in the Toronto Star on March 14, 2015 as Privacy Under Attack in Anti-Terror Bill As witnesses line up to warn about the dangers associated with Bill C-51, Canada’s anti-terrorism bill, it is increasingly clear that the proposed legislation is an unprecedented undermining of Canadian privacy protection. Much of […]