The documents also highlight internal thinking on several major issues, including Netflix regulation, the CRTC’s Let’s Talk TV rulings, and copyright. On the Netflix tax, the documents indicate that officials downplayed the possibility of legislative reforms for broadcasting before the consultation was even launched. Part of the department’s communication plan includes the following Q&A on Netflix regulation:

Some have been calling for changes to the Broadcasting Act – including to require OTT players like Netflix to be regulated by the CRTC. Do you see moving in that direction as a potential result of these consultations?

a. In my view, legislation is not the starting point. It’s one tool that governments have used to support cultural policy objectives.
b. The starting point is ensuring that we strengthen the creation, discovery and export of Canadian content in a digital world.
c. When it comes to tools like legislation, you’ll see that our questionnaire asks Canadians and stakeholders what tools they think will be most effective in the longer-term.
d. I don’t think we should assume the tools developed by previous generations will be the best ones for the future.
e. Netflix, Shomi, Crave – these are all great platforms. A key issue is the discovery of Canadian content on these platforms and how we can help creators ensure their content is found on platforms such as these.

In the weeks that followed, Joly indicated that there will be no Netflix tax (a position consistent with the consultation document released this week). The reference to not assuming that tools developed by previous generations working for the future is particularly notable.

The internal documents also reveal that officials do not plan to use the consultation process to review or overturn the CRTC’s Talk TV rulings.  Those have been controversial within the Canadian broadcast and creative communities, but the communication plan is clear on the issue:

Many of your cultural stakeholders in the broadcasting sector are still reeling from the CRTC’s LTTV decisions. Will the consultations look into action that can be taken to reverse these decisions?

No. These consultations are focused on the future and ensuring our cultural sector navigates the digital shift successfully.

The role of copyright in the consultation is also interesting. When the consultation was first reported in the Globe, the inclusion of copyright caught many by surprise given the planned copyright review in 2017.  While that generated some concern, the reality is that copyright was not even included in the initial government documents. Despite weeks of drafts, no one seemed to notice that the cultural toolkit made no reference to the Copyright Act. 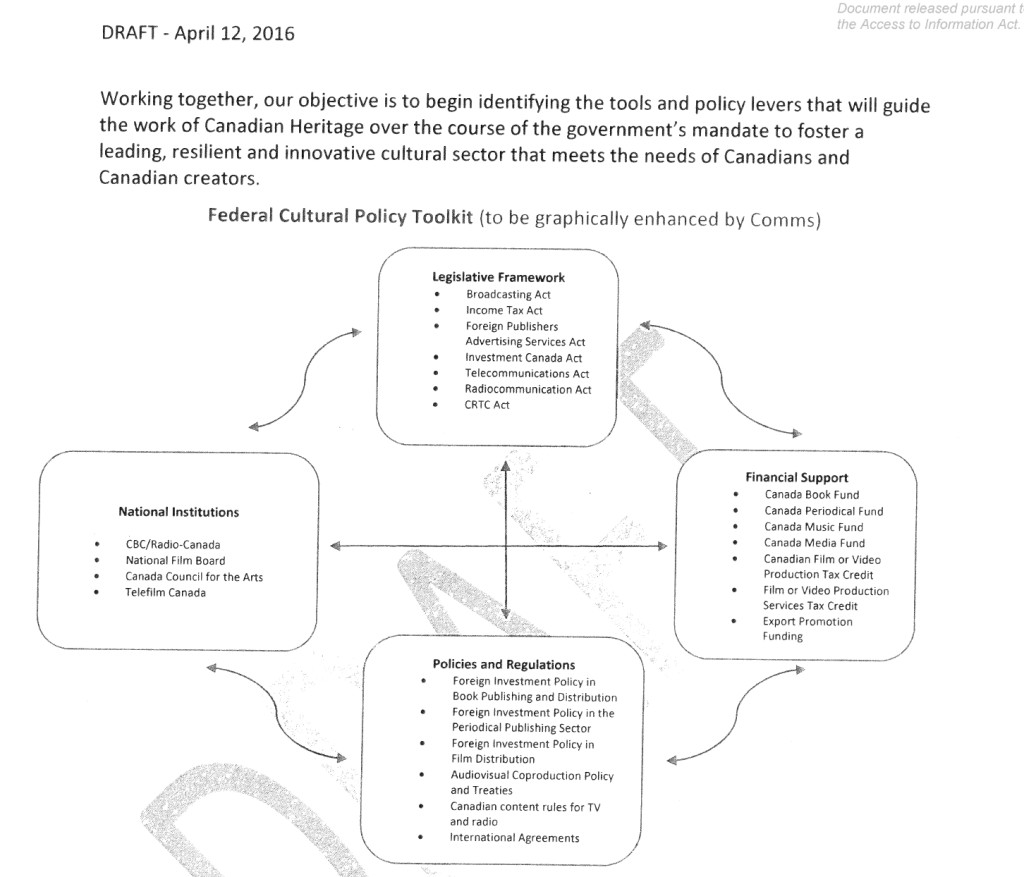 Days before the launch, adding the Copyright Act became an issue with a request to the Joly’s chief of staff to amend the toolkit diagram. 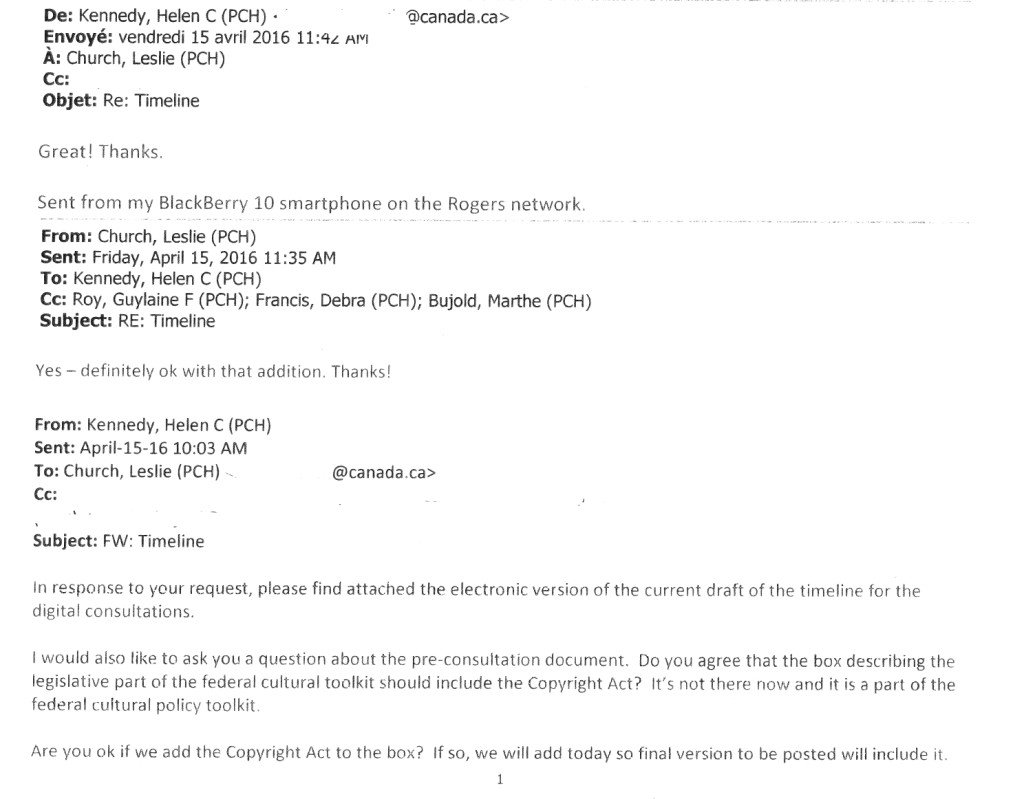 The change was made along with a communication plan addition that also downplayed the role of copyright in the consultation:

Will these consultations replace the Parliamentary Review of the Copyright Act which will take place in 2017?

No. The Copyright Act includes a requirement for a review of the Act by Parliament every five years to ensure that it remains responsive to a changing environment. The Parliamentary review will be launched in late 2017.  The objective of the present consultations is to hear from Canadians and stakeholders on the role of the federal cultural policy toolkit plays in strengthening content creation, discovery and export in a digital world.

There are still months left in the consultation but the internal documents shed new light on the government’s thinking before its formal launch and hint at where the consultation is likely to go as it nears the stage of recommendations and policy formulation later this fall.