The result is a digital regulatory framework designed to enable Canadian creators to compete on a level playing in Canada (net neutrality), encourage the creation of programming that finds international audiences and partnerships (TalkTV), grant consumers greater television choice (skinny basic and pick-and-pay) and more competitive Internet services (wholesale fibre access), ensure universal Internet access (TalkBroadband), maintain deregulation of Internet-based services (new media exemption), facilitate new Canadian Internet entrants (hybrid services), and press broadcasters to reduce their reliance on U.S. programming (simsub). The policies may not universally succeed (and the simsub decision did not go as far as he may have wanted), but there is no doubting the strategy. In fact, despite the expectation that some have for Canadian Heritage Minister Melanie Joly to chart a new path, most of her public comments on digital Cancon are headed in the same direction.

Is 5 percent for PNI too low? At least four things can be said to defend the decision and place the impact into proper perspective. First, the argument that broadcasters needed a lower PNI number to compete with Internet-based services such as Netflix has merit. There are good reasons for not creating a mandatory contributions requirement for Internet video services, but the cost gap between regulated and unregulated services is relevant to the setting of mandated contributions for regulated broadcast services. Further, the decision lends credence to those who regularly whispered that the lobbying campaign for a Netflix tax was never about the money that could be generated from the streaming giant (a five percent tax on Netflix Canadian revenues generates a tiny amount of money given that Canadian TV production is a $2.6 billion industry) but rather about maintaining the contributions for the regulated services. When the licences come up for renewal in five years, the calls for the elimination of any contribution in the face of unregulated competition will be far louder.

Second, the suggestion that the Canadian television industry is – as Kate Taylor’s column states – “left to fend for themselves” ignores the massive public support for Canadian content creation. Given the amount invested annually by Canadian taxpayers, it is simply not credible to claim that Canadian television has been abandoned. The CMPA’s Profile 2016 tells the story with well over a billion dollars contributed from public sources including the public broadcaster, federal and provincial tax credits, and the Canadian Media Fund.

Third, while the industry is clearly not left to fend for itself, the CRTC decision is part of a shift that encourages and rewards success, not just creation. The claim that reduced mandatory PNI will devastate the industry is premised on the notion that Canadian broadcasters will only invest in domestic programming if required to do so. Licensing cheaper foreign programming is understandably attractive, yet the long-term success of broadcasters increasingly depends on controlling original content that can be delivered through multiple channels and markets (particularly if simsub disappears). In other words, the market encourages investment in original programming and the CRTC has sought to establish conditions that promote such investment.

Fourth,  critics of the decision are quick to point to higher profile Canadian fictional programming that is said to be at risk, but the CMPA data confirms that private broadcasters are relatively minor players when it comes to the financing of Canadian drama. The report states:

The CMPA chart below confirms that conclusion with private broadcasters contributing only 9 percent of the financing for fictional programs, less than federal and provincial tax credits, Canadian distributors, foreign financing, and the CMF.  Private broadcasters allocate much of their money toward variety and performing arts as well as “lifestyle and human interest” programming, which including magazine style shows. 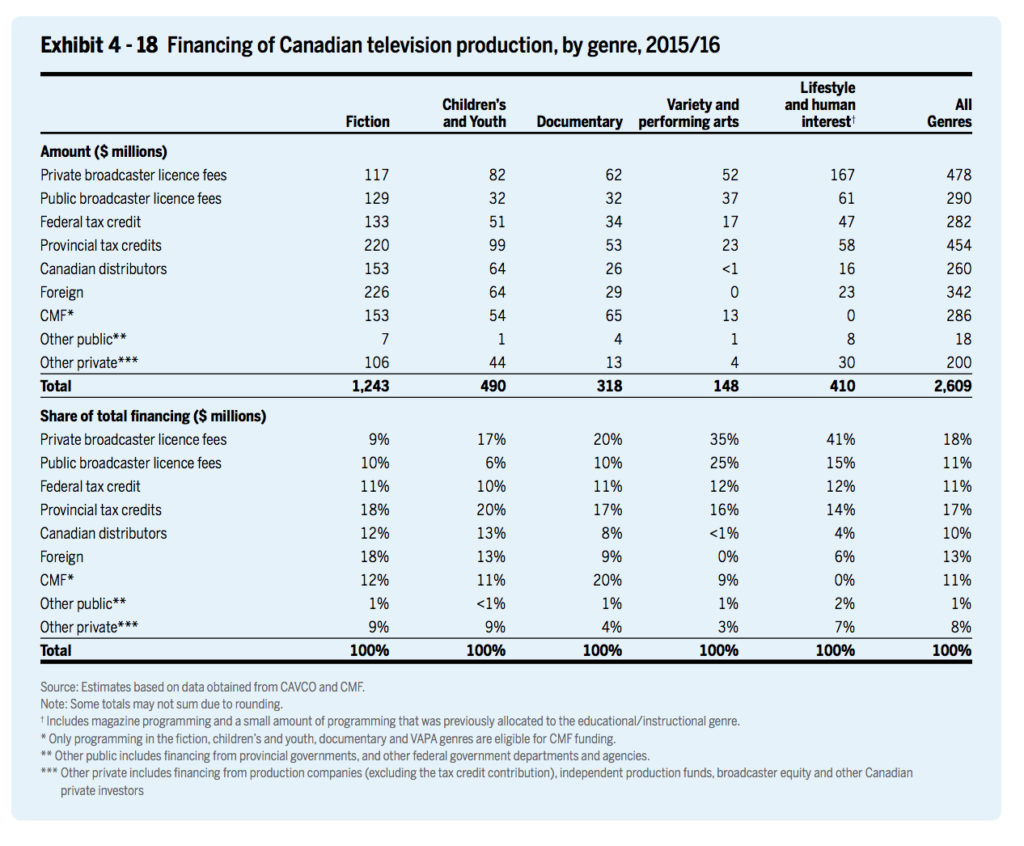 In other words, financing and the success or failure of Canadian programming such as dramas do not depend upon private broadcaster spending. In fact, the WGC release effectively confirms this since their worst case scenario – $40 million in reduced broadcaster PNI spending per year – represents just a two percent reduction in total financing for the fiction, children’s and documentary genres in Canada at a time when foreign funding from services such as Netflix is on the rise. Hardly the stuff of devastation.