A source has provided screen shots of internal Bell corporate correspondence encouraging employees to file interventions at the CRTC in support of its website blocking proposal. The effort to drum up support is not unique: ACTRA posted an advocacy page when the proposal launched complete with suggested language to use at the CRTC and OpenMedia has begun supporting Unfairplay.ca, which allows Canadians to learn more about the issue and make their voices heard. However, internal corporate messaging from Bell to its employees telling them “you can let the CRTC know you support FairPlay Canada” is likely to raise concerns Bell will participate in the CRTC process on its own behalf and provide behind-the-scenes encouragement to employees to add supportive interventions. In fact, iPhoneinCanada quickly ran a story on the issue calling the approach “disingenuous.” 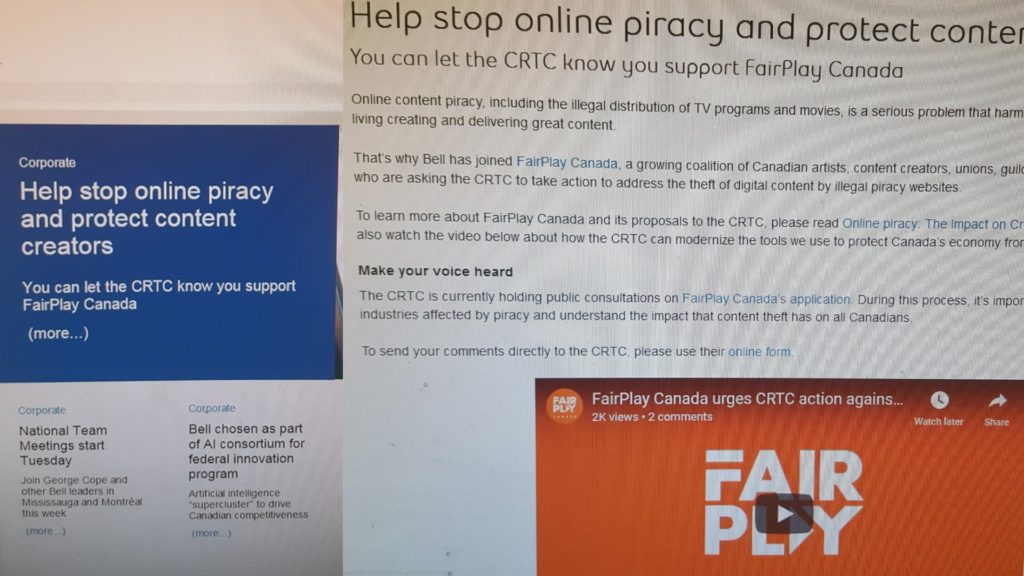 Bell may be particularly vulnerable on the issue since in 2015 it agreed to pay a $1.25 million settlement with the Competition Bureau over encouraging some Bell employees to post positive reviews and ratings on Bell apps in the iTunes Apple Store and Google Play Store. As part of the consent agreement, Bell agreed to enhance its corporate compliance program “with a specific focus on prohibiting the rating, ranking or reviewing of apps in app stores by employees and contractors.” The agreement notes that the Commissioner of Competition concluded that the company-encouraged postings “created the materially false or misleading general impression that they were made by independent and impartial consumers.”

There is nothing on the materials I was provided that indicated Bell also encouraged employees to disclose their affiliation to the company. As of today, there is only one submission of more than 5,200 that lists Bell as the company affiliation (and that intervention is unlikely to be affiliated with Bell). All Canadians can provide their views on the website blocking proposal, but corporate encouragement to employees to participate in regulatory processes on the company’s behalf may raise the kinds of concerns regarding misleading impressions that sparked the Commissioner of Competition to intervene in 2015.