The Consequence of Uncompetitiveness: Canadians Ration Wireless Data As Monthly Usage Ranks Among the Lowest in the OECD

The CRTC released its overdue 2018 Communications Monitoring Report for the telecom sector yesterday, providing fresh data that confirms what millions of consumers already know: the Canadian wireless sector remains uncompetitive, leaving a dominant big three providers whose subscribers use less data than consumers in most other OECD countries. While the carriers long ago shifted away from arguments on price toward one of “quality” (ie. Canada may not be cheap for wireless but you get what you pay for), the data strongly suggests that high prices leave consumers worried about using those networks.

The global comparative data is unequivocal with consumers in many OECD countries using double or triple the amount of monthly data.

Moreover, data usage with the higher priced big three is considerably lower than with the competition, suggestive of the impact of pricing on usage. 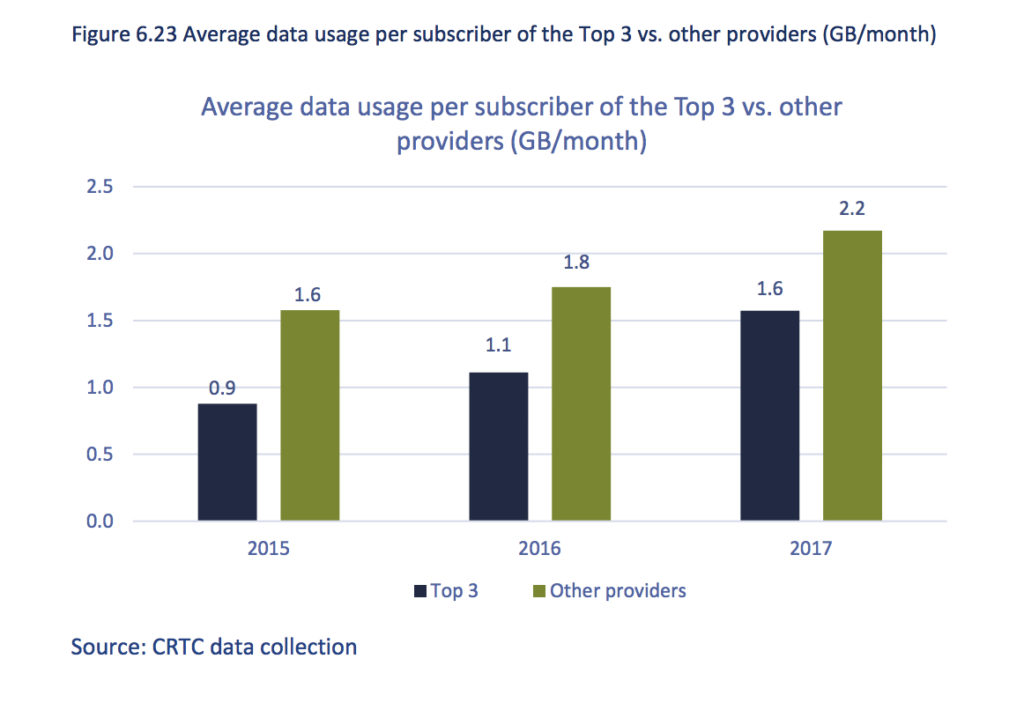 The CRTC data also highlights yet again to how overage charges remain another quiet source of massive consumer wireless spending. Last year, the CRTC specifically pointed to overage spending at more than a billion per year. This year, the data is buried in the data tables but it tells much the same story with more than $1.2 billion in revenue generated from mobile overage charges.

Taken together, the data points to a market dominated by three big carriers with retail pricing that create all the wrong incentives for a country focused on innovation. Rather than encouraging data use, the current marketplace forces consumers to ration their data and to subscribe to cheaper data plans with the hope of not running into overage charges.

Unfortunately, Canadian consumers are being hit with the worst of both worlds: less data use per month than the vast majority of OECD countries alongside over a billion dollars in overage fees. For Innovation, Science and Economic Development Minister Navdeep Bains, the CRTC report is further evidence that “steps in the right direction” have not resulted in significant change, suggesting it is the government’s wireless policy that is in dire need of refresh.