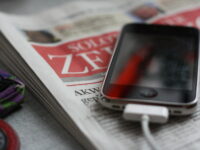 The Law Bytes Podcast, Episode 141: Why the Online News Act is a Bad Solution to a Real Problem, Part Five – My Appearance Before the Standing Committee on Canadian Heritage

The Standing Committee on Canadian Heritage launched its hearings on the Online News Act (Bill C-18) with a pair of hearings late last month. At this stage, it remains unclear whether the committee will undertake the extensive study the bill deserves. I appeared in the very first hearing, using my opening statement to touch on four key concerns: the definition of “use”, government intervention, the risk of increased misinformation, and the breaches of Canada’s trade and treaty obligations. Coinciding with National Newspaper Week, this week’s Law Bytes podcast features an introduction to the bill and audio clips from the appearance.