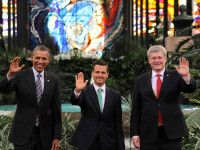 The Trouble with the TPP, Day 6: The Price of Entry

An examination of the Trouble with the TPP copyright provisions would not be complete without discussing how Canada reformed its law before entering the negotiations as part of the price of admission to the TPP talks (prior posts include Day 1: US Blocks Balancing Provisions, Day 2: Locking in Digital Locks, Day 3: Copyright Term Extension, Day 4: Copyright Notice and Takedown Rules, Day 5: Rights Holders “Shall” vs. Users “May”). The pre-TPP reforms must surely be considered part of the cost of the agreement even if proponents now argue that the TPP is consistent with (the reformed) Canadian law.

Canada was not an initial participant in the TPP negotiations. The Harper government began working on entry into the TPP in 2009, leading to a formal request for participation in the negotiations in 2011. The U.S. held a consultation on Canada’s proposed entry into the TPP a year later, resulting in the IIPA, the lead lobby group for the movie, music, and software industry, urging the U.S. government to keep Canada out of the negotiations until a copyright bill was passed that satisfied U.S. expectations. The Canadian government responded by promising to pass the law and noting that it had also signed the Anti-Counterfeiting Trade Agreement (ACTA). The U.S. demands had an enormous impact on the contents of the Canadian copyright bill, particularly the retention of restrictive digital lock rules that were at the very top of the U.S. priority list.