The WGC response takes issue with the emphasis on competition, alternately claiming that Canadian television has always competed in the marketplace but that it cannot compete without regulatory mandates requiring Canadian broadcasters to invest in original Canadian programming. While some of the response is confusing or inaccurate (it mistakes the $2.6 billion Canadian television production market for the Netflix Canadian market, refers to a 1999 Blais television policy when Françoise Bertrand was CRTC chair at the time, discounts co-productions that often feature Canadian themes or iconic stories and generate significant Canadian employment and foreign investment), at its heart is the WGC view that longstanding regulations and market protections should continue or be expanded in the digital environment. In today’s world, Canadians enjoy far more choice, broadcasters face far more competition, and creators can tap into a myriad of new markets and potential investors, but the WGC vision is that old-style regulations should remain in place.

Perhaps nowhere is that more apparent than in the WGC’s final paragraph, which claims that a $40 million drop in broadcaster spending amounts to a 25% decline that it previously described as devastating. The claim simply ignores the reality of how Canadian television is financed today. As I note in my post, private broadcasters today are minor players, contributing only 9% of total financing for Canadian fictional programming. To again quote the CMPA:

The WGC argues that English and French language production should be treated separately, yet the CMPA data for English-language only production does little to change the analysis. In fact, broadcaster contributions for fictional programs in English are even lower as a percentage of total financing (7% in English vs. 9% overall) and rank as the smallest source of financing among tax credits, foreign funding, and the Canadian Media Fund. In fact, foreign funding is more than three times as large as private broadcaster funding for fictional English-language programs. An overall drop of $40 million for fiction, children’s programming, and documentaries would still just result in a decline of 2.5% of overall financing or 1/10th of what the WGC claims. Further, while it argues that the broadcaster window is needed to trigger other support, that too is changing with new CAVCO rules that allow online platforms to meet the “shown in Canada” requirement. 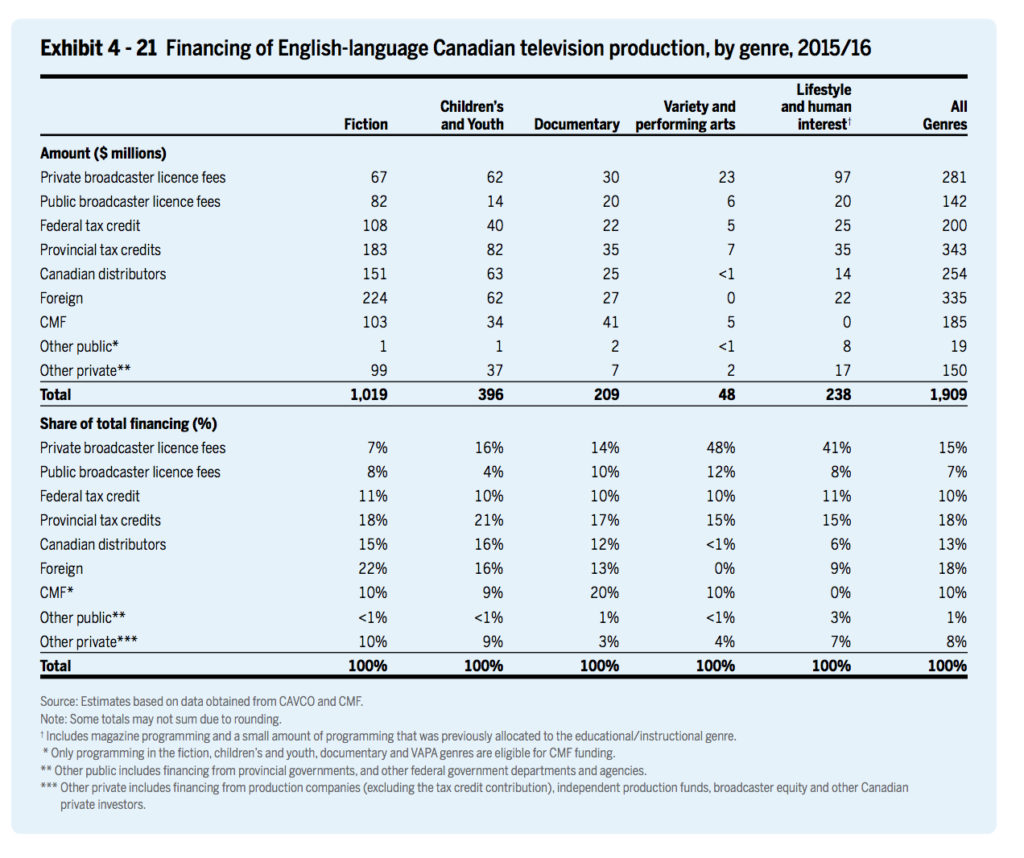 The issue ultimately comes down to two different perspectives of Canadian content in the digital environment. The CRTC view – one that I defended in my post – is that Canadian creators can compete on the global stage, creating compelling content that finds investors and interested broadcasters from around the world. There is still a need for public support in this digital environment (a billion dollars is hardly insignificant) but the CRTC has confidence in Canadian creators and a belief that relying on outdated policies that regulate how content is broadcast or financed make little sense in a globally competitive marketplace that now involves video competition from giants such as Netflix, Google, and Facebook.

Yet Netflix spends millions on production in Canada not because it faces a regulatory requirement, but rather because the entire package – innovative creators, tax credits, good partners – offers a compelling reason for doing so. Indeed, the data shows that the Canadian industry has thrived in recent years for reasons that have little to do with pre-digital regulations with a huge shift in Canadian television production financing from domestic funding to foreign investment.

As Minister Joly crafts her digital Cancon policy, she is faced with the choice of competing perspectives: a policy based on confidence that Canadian creators can compete on the world stage based on a policy framework that attracts investment and provides support for creation and promotion or one premised on the fear that success is only possible when the government mandates contributions from broadcasters and Internet companies.