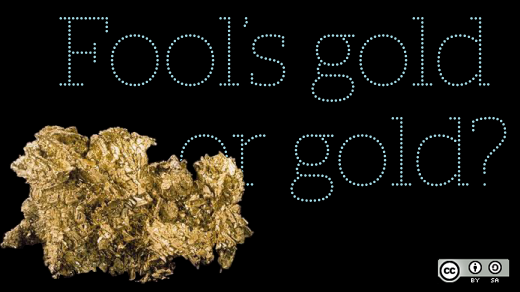 Is your culture made of gold or fool's gold? by opensource.com (CC BY-SA 2.0) https://flic.kr/p/8pHJNc

Perhaps most troubling is that the judge has created a substantive new policy framework for site blocking, an issue that given the many complex policy issues (including copyright enforcement, freedom of expression, net neutrality, and telecom competition) is best left to Parliament. Indeed, the activist judicial approach explicitly engages in an analysis that considers many of the policy issues but arrives at its own conclusion about how best to balance competing interests. These are issues that are best left to elected officials. The Standing Committee on Industry, Science and Economic Development, which completed the comprehensive copyright review earlier this year, heard extensive submissions from groups calling for reforms to the law to include site blocking. It instead recommended:

Following the review of the Telecommunications Act, that the Government of Canada consider evaluating tools to provide injunctive relief in a court of law for deliberate online copyright infringement and that paramount importance be given to net neutrality in dealing with impacts on the form and function of Internet in the application of copyright law.

The CRTC, which rejected a proposal for an administrative site blocking system in the FairPlay case, also thought the issue was best left to the government. Its ruling specifically cited the copyright review and the review of the Broadcasting and Telecommunications Act as avenues to address the issue. In other words, the appropriate venue to consider site blocking was government, not an administrative agency.

In fact, even supporters of the GoldTV decision argued before the copyright review that the legislative reform was the proper approach. For example, the copyright review report specifically cites Barry Sookman as noting that the issues associated with a site blocking system “are fundamental ones for Parliament”, warning against courts making them up:

There are going to be questions about what type of sites should be blocked. Should they be primarily infringing, or should they be something else? What factors should the court take into account when deciding to make an order? Who should bear the cost of site blocking orders? What method should be ordered to be used for site blocking? Then, how do we deal with the inevitable attempts to circumvent these orders, which, by the way, courts have said don’t undermine their effectiveness? I believe those questions are fundamental ones for Parliament. Courts can make them  up, but we might end up with one or two trips to the Supreme Court and with rights holders and users spending a ton of money.

Further, the same companies that obtained this order also supported the FairPlay site blocking system. As part of that process, they argued that courts were not well placed to make decisions on site blocking. In their reply comments, they argue:

The Commission and the IPRA in particular will have greater expertise in telecommunications networks and Internet piracy, making them better placed than generalist courts to make technical decisions regarding how to best disable access to piracy sites and avoid overblocking.

In reviewing the GoldTV ruling, it is obvious that site blocking raises so many issues that it requires a government policy decision, not a single judge making a myriad of policy calls. In this case, the judge acknowledges that:

While only TekSavvy stepped up to oppose the motion, it marshalled evidence that raised real policy concerns about site blocking. Yet rather than leaving it to the government to decide how to balance or address these concerns, the judge simply decided that an order was still appropriate.

It seems to me to be clear from this guidance that Article 11 does indeed provide a principled basis for extending the practice of the court in relation to the grant of injunctions to encompass, where appropriate, the services of an intermediary, such as one of the ISPs, which have been used by a third party to infringe a registered trade mark. There is no dispute that the ISPs are intermediaries within the meaning of Article 11 and accordingly, subject to the threshold conditions to which I shall shortly come, I believe that this court must now recognise pursuant to general equitable principles that this is one of those new categories of case in which the court may grant an injunction when it is satisfied that it is just and convenient to do so.

In other words, the court’s analysis is premised on the existence of law beyond a general copyright provision on remedies that open the door to site blocking. In fact, the court explicitly states “I am satisfied for the reasons I have given that the court did have jurisdiction to make the orders in issue under s.37(1) of the 1981 Act as interpreted in light of Article 11 of the Enforcement Directive.”

The copyright law and the European directive worked together to establish the jurisdiction to issue the order in Cartier (note that a later UKSC decision, which addressed costs, noted in obiter that it thought an order could occur on equity grounds). In Canada, we do not have a similar provision. Parliament addressed the issue of sites that are primarily engaged in infringement in 2012 with the enabler provision, which introduces new enforcement powers against Canadian-based sites. It has thus far declined to change the law to target foreign sites with site blocking measures. To establish a Canadian site blocking system based on a different UK law calls into question the correctness of the decision.

The judge’s dismissal of the CRTC and the Telecommunications Act is also troubling. The judge rules that the CRTC cannot interfere with a court order under Section 36 of the Telecommunications Act, which has been used to support net neutrality in Canada by prohibiting Canadian carriers from controlling the content or influencing the meaning or purpose of telecommunications unless the CRTC otherwise approves. Yet that the role of the Commission is precisely why the same companies seeking the GoldTV order asked the CRTC to establish a site blocking system. In the reply comments in the FairPlay case, the companies state that Section 36 “confirms that it is the Commission that should be engaged to determine the sites to which access should be disabled.”

The limited opposition to the order also highlights why it is so problematic. It is notable that only TekSavvy opposed the motion, while Distributel opposed certain terms in the blocking order. Bell, Fido, Rogers, and Videotron consented to the motion, while the remaining ISPs took no position. TekSavvy clearly had an impact, but with an evidentiary record dominated by the companies seeking the order and no intervenors to supplement the record, this was a one-sided case that merited far more participation and expertise, similar how the FairPlay record unfolded at the CRTC.

Given the prioritization of the Charter of Rights and Freedoms and the importance of freedom of expression, site blocking will rarely be justifiable. Should the legislature identify circumstances where it is appropriate, it would only come with significant safeguards against misuse and overblocking and only as a measure of last resort. Yet in this case, the site blocking was practically the first step, not the last. The companies moved for a site blocking order almost immediately and made no real effort to use less restrictive means to achieve their goals. In fact, the court found that an earlier injunction did succeed in reducing access to the GoldTV site, but concluded that an order was still reasonable given that some access was still occurring. The case should be appealed and the site blocking issue ultimately addressed by Parliament, not a lone federal court judge.