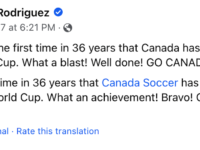 Hours after the Canadian men’s soccer team officially qualified for the World Cup last month, Canadian Heritage Minister Pablo Rodriguez took to Facebook to celebrate the win. The Rodriguez post included a link to a La Presse article on the game (the same link I’ve just posted). Visitors that click on the link are taken to the newspaper’s website, shown a series of ads, offered some encouragement to subscribe, and presented with a series of widgets they can use to also post the link to Facebook, Twitter or LinkedIn. While there is nothing unusual about that in today’s media economy, yesterday Rodriguez introduced a bill that would fundamentally alter the activity. According to Rodriguez, Facebook should pay La Presse for the link that he posted and his Bill C-18, the Online News Act, would create a mandatory arbitration system overseen by the CRTC to ensure that they do.