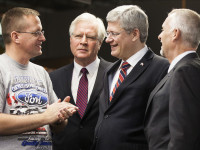 The Trouble With the TPP, Day 46: Limited Employment Gains or Even Job Losses for Canada

Yesterday’s Trouble with the TPP post canvassed the economic studies released to date on the agreement, finding that the evidence suggests that the economic gains for Canada are modest at best. In addition to efforts to assess the economic growth impact of the TPP, some studies have also tried to estimate its effect on employment.

The Tufts University study referenced yesterday has a specific analysis on job growth. It anticipates that Canada will lose jobs as a result of the TPP, projecting a loss of 58,000 jobs in Canada. That ranks the third highest in the TPP, but the highest of all countries on a per capita basis.