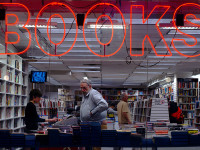 False Alarms: Examining the Misleading Claims About the State of Canadian Publishers

Earlier this month, Digital Book World posted an article chronicling the discussion of a conference copyright panel featuring Access Copyright counsel Erin Finlay (the article was promoted by Access Copyright). The article caught my attention due to Finlay’s comments about the impact of Canadian copyright on education publishers:

“Another example Finlay used was the case of Broadview Press, which is an independent Canadian publisher that cannot publish anymore.“

The comment prompted me to contact Don LePan, the Broadview Press owner, who has been outspoken critic of the copyright term extension in the TPP. LePan was shocked by the claim which he said was completely inaccurate. He posted a long response on the Digital Book World site, which responded by amending the piece. Kristine Hoang, the journalist who wrote the article, noted that “what I had written was a reference to Erin Finlay’s direct quotes in my recorded transcript where she said ‘Broadview Press cannot publish anymore.'”

The erroneous claim about the state of a Canadian publisher would be surprising if it did not happen so frequently.