A new report out today from Rewheel Research, a Finnish consultancy, confirms these concerns as it shows that Canadian pricing may be declining, but the market has actually become less competitive when compared to other developed economies. Rewheel has called attention to Canadian pricing issues in the past and Antonios Drossos, managing partner of the firm, joined me on my Lawbytes podcast to discuss the issues over the summer.  The latest report, based on pricing in markets worldwide available this month, notes:

This chart demonstrates how Canadian price declines are not keeping pace with other countries: 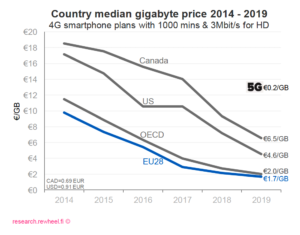 In fact, notwithstanding the much-touted price declines, the reality is that “the median smartphone plan gigabyte price in Canada was 18 times higher…than the median prices in 4-MNO competitive large European markets.”

It is also worth noting the Rewheel has also begun discounting the “unlimited” plans that recently entered the Canadian market, treating it as a finite plan based on the amount of data available before the provider slows or degrades the accessible speed. Based on global market standards, unlimited requires at least one terabyte (1,000 GB) of data and no throttling of speed below 3 Mbps. By comparison, the Rogers “unlimited” plans go to a maximum of 50 GB and throttle to 512 Kbps. In other words, not only are Canadian wireless plans uncompetitive, but even the new unlimited plans do not measure up to many other countries.