Guilbeault has said that he cannot provide the public with policy direction specifics, amounting to a “trust me” approach on critical aspects of broadcast policy. The closest the public has come to learning the expected details of the policy direction is a single slide in the presentation that was provided to stakeholders the day the bill was introduced.  That slide is posted below: 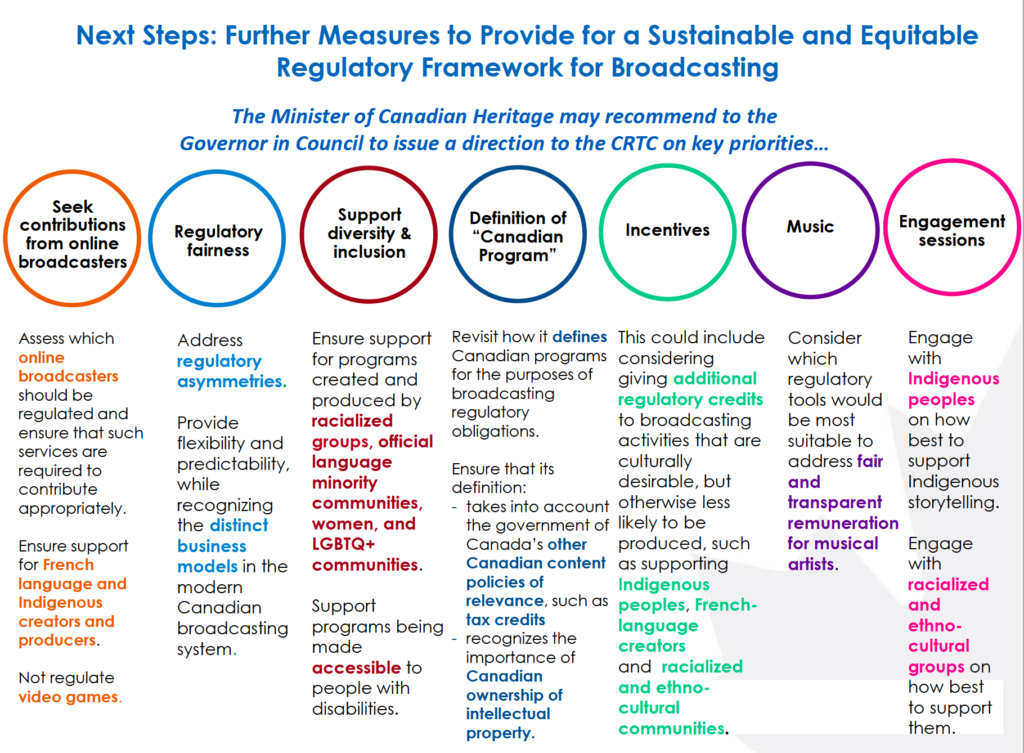 The slide illustrates just how much the government has left for a policy direction rather than include within the bill or provide forthright guidance on its intentions. It includes exclusions from the scope of regulation (video games), revisit the definition of Canadian programs. tax credits policies for Canadian content, IP policy, Copyright Board work on music licensing, French language support, regulation of online broadcasters, and support for racialized groups. All of this is framed as further measures that the government may recommend to the CRTC by way of a policy direction.

The degree of uncertainty is staggering with the government alternately claiming a firm position on issues that are actually left to the CRTC or leaving important issues open for future determination. . The net effect is that the policy direction functions as the missing half of Bill C-10, potentially covering issued not included in the bill or supplementing provisions woefully lacking in detail. Yet unlike Bill C-10, there are no debates, no hearings, and no text. The approach is a repudiation of the independence of the CRTC and a significant retreat from the government’s commitment to transparent lawmaking, leaving all stakeholders with little visibility about the full plans for broadcast and Internet regulation in Canada.

(prior posts in the Broadcasting Act Blunder series include Day 1: Why there is no Canadian Content Crisis, Day 2: What the Government Doesn’t Say About Creating a “Level Playing Field”, Day 3: Minister Guilbeault Says Bill C-10 Contains Economic Thresholds That Limit Internet Regulation. It Doesn’t, Day 4: Why Many News Sites are Captured by Bill C-10, Day 5: Narrow Exclusion of User Generated Content Services, Day 6: The Beginning of the End of Canadian Broadcast Ownership and Control Requirements, Day 7: Beware Bill C-10’s Unintended Consequences, Day 8: The Unnecessary Discoverability Requirements, Day 9: Why Use Cross-Subsidies When the Government is Rolling out Tech Tax Policies?, Day 10: Downgrading the Role of Canadians in their Own Programming, Day 11: The “Regulate Everything” Approach – Licence or Registration Required, Broadcast Reform Bill Could Spell the End of Canadian Ownership Requirements, Day 12: The “Regulate Everything” Approach – The CRTC Conditions, Day 13: The “Regulate Everything” Approach – Targeting Individual Services, Day 14: The Risk to Canadian Ownership of Intellectual Property, Day 15: Mandated Confidential Data Disclosures May Keep Companies Out of Canada, Day 16: Mandated Payments and a Reality Check on Guilbeault’s Billion Dollar Claim, The Law Bytes Podcast, Episode 73: The Broadcasting Act Blunder – Why Minister Guilbeault is Wrong)