The Commission may, in furtherance of its objects, make orders imposing conditions on the carrying on of broadcasting undertakings that the Commission considers appropriate for the implementation of the broadcasting policy set out in subsection 3(1), including conditions respecting:
(e)the presentation of programs and programming services for selection by the public, including the showcasing and the discoverability of Canadian programs and programming services, such as French language original programs;

The origins of this provision lies in the 2020 Broadcast and Telecommunications Legislative Review (BTLR) Panel report, which placed considerable emphasis on the need to support the “discoverability” of Canadian content:

The CRTC must also be able to impose discoverability measures on media content companies. Consumers now have access to an endless choice of content, making it difficult to find, or simply recognize, Canadian content. In fact, a majority of consumers have said that they have difficulty finding content they want to watch. Further, algorithms and AI-based processes have a major influence on program recommendations with a consequent influence on the discoverability of content.

While the notion has found considerable support from both the government and opposition parties that often cite it as a key rationale for Bill C-11, the reality is that there is little evidence that there is actually a problem (I discussed the discoverability issue last year with Professor Fenwick McKelvey in this Law Bytes podcast). The BTLR report contains two footnotes that point to two reports as the basis for its recommendation: a 2017 Price Waterhouse Cooper report called How Tech Will Transform Content Discovery and a 2016 report from Telefilm Canada titled Discoverability: Toward a Common Frame of Reference Part 2: The Audience Journey (the Telefilm Canada report is incorrectly cited as a 2018 report but actually dates to 2016).

The Price Waterhouse Coopers report involved a survey of 1,000 U.S. residents, had nothing to do with Canada, and said absolutely nothing about the ability to find or recognize Canadian content. The Telefilm Canada report was focused on Canada but did not find that Canadians have trouble finding Canadian content. Rather, it found a range of experiences and emphasized that “word-of-mouth is Canadians’ main discoverability method.”

I have written in the past about how it is not hard to discover Canadian content on Netflix. For example, several years ago I created a fresh Netflix account to see whether I could find Canadian programming and if the Netflix algorithm would adjust to my interests. The reality is that “discovering” Canadian content on Netflix only requires typing Canada into the search box. That immediately generates a Canadian Movies and TV section that features many shows and movies. Typing “Canadian” generates tabs for Canadian TV Shows, Canadian Movies, and Critically-acclaimed Canadian Movies, Canadian TV Comedies, and much more.

More recently, some advocates of Bill C-11 point to the need to support discovering French language content on services such as YouTube. So I tried that too, creating a fresh Youtube account, selecting French as my preferred language, and searching for the Quebec artists that were raised by MPs during the first day of full debate on the bill on February 16, 2022. That included videos of Charlotte Cardin and Lara Fabian (both mentioned by Canadian Heritage Minister Pablo Rodriguez) as well as the Quebec folk band Le Vent du Nord (NDP MP Alex Boulerice’s brother). After watching those videos, the resulting recommendations began to add new performers. 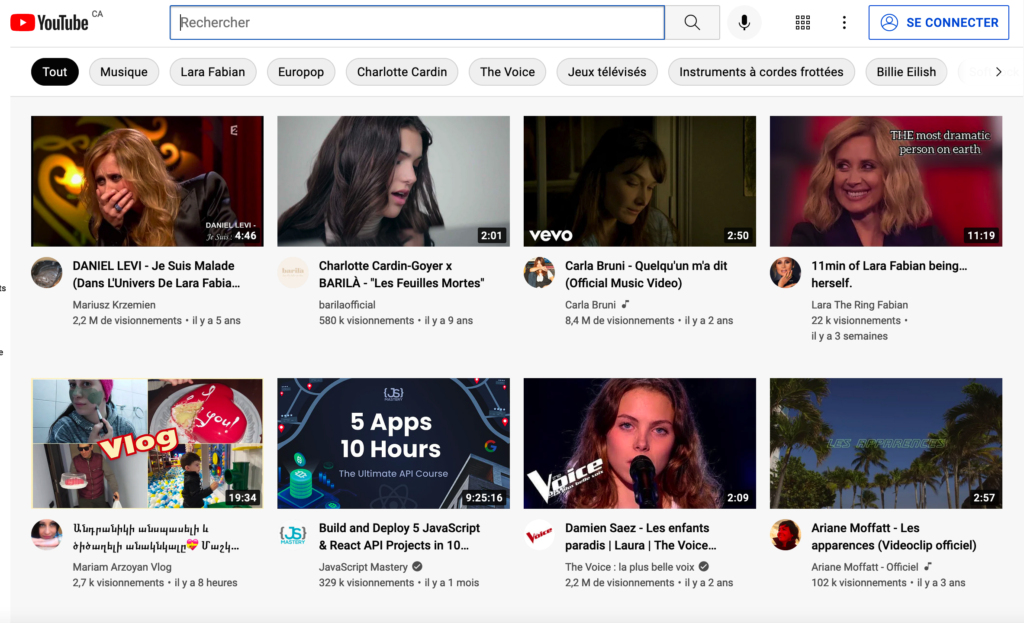 I then added clips from Bye Bye 2021, which expanded the scope of recommendations: 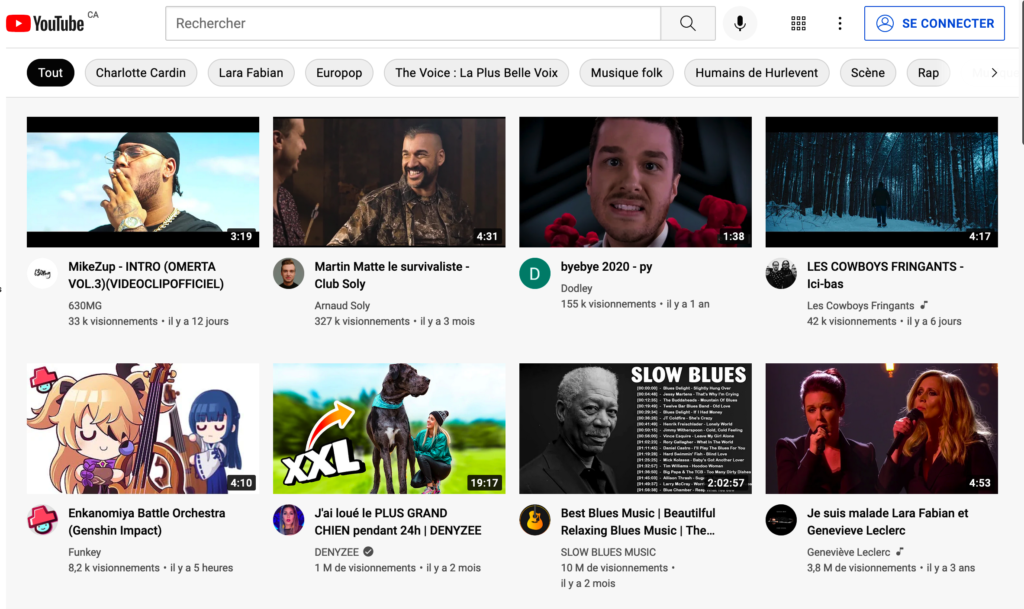 Watching a few more videos from a list of top Quebec-based Youtubers such as Polo, Denyzee, and Isabelle Boulay led to an even broader set of recommendations:

It took less than an hour of video watching for the algorithm to primarily recommend new content related to Quebec or French language music, tv or film. None of this should come as a surprise. Services such as Netflix or Youtube have no motivation or reason to make it hard to discover Canadian content. Indeed, the opposite is true. If the user or subscribers demonstrates an interest in such content, they have a strong motivation to give them more of the same since Internet streamers must ensure that subscribers find the content they want to watch or they risk losing them as customers. In this scenario, it is not regulation that drives access to Canadian content but rather subscriber demand.

It is worth considering why discoverability has been such a focal point for the Canadian creative sector when much of the evidence suggests that users need do little more than put the term Canada in a search box or rely on algorithms that will seek to provide them with Canadian content where it is of interest. Canadian film and television production has long been a product of regulatory requirements with broadcasters required to air a certain percentage of Canadian content as a condition of licence. With a few notable exceptions, Canadian content has played second fiddle to more popular U.S. programming, which has meant that broadcasters were more likely to air the Canadian programs at less popular times. Moreover, given the reliance on simultaneous substitution, changes in U.S. programming times has had a spillover effect on Canada, with Canadian broadcasters forced to change their schedules in response to U.S. changes. That has meant that Canadian programs often lacked a consistent time in the programming schedule. This experience may leave some fearing that their programs won’t be found unless efforts are made to make them more discoverable, but that misunderstands the digital environment.

The Canadian cultural sector has for years claimed that Canadians want access to Canadian programming. If that is true, that provides Netflix and its competitors with all the incentive they need to ensure that they offer Canadian programming and that it is easy to find. Further, on platforms such as Youtube, the algorithm is already annoyingly responsive to past views, meaning that similar content is constantly being pushed to users. But the issue with services such as Youtube and TikTok is not just that there is no need for CRTC regulation on discoverability. It is that CRTC-mandated discoverability is likely to harm Canadian creators. More on that aspect of the discoverability and the poor understanding of how algorithms work in an upcoming post.