Last month, the Broadcast and Telecommunications Legislative Review Panel report sparked an immediate outcry as it recommended that the CRTC identify “trusted” news sites and require news aggregators to link to them:

We recommend that to promote the discoverability of Canadian news content, the CRTC impose the following requirements, as appropriate, on media aggregation and media sharing undertakings: links to the websites of Canadian sources of accurate, trusted, and reliable sources of news with a view to ensuring a diversity of voices; and prominence rules to ensure visibility and access to such sources of news.

In fact, notwithstanding Canadian Heritage Minister Steven Guilbeault’s attempts to walk-back initial comments that regulating news websites and services was “no big deal”, the reality is the regulatory structure envisioned by the panel also empowers the CRTC to require these organizations to disclose financial information, consumption data, and algorithmic information. It would also be given the power to regulate commercial negotiations between news providers and these sites and services.

Notwithstanding the public backlash against the proposals (including a House of Commons petition), there is another lobbying effort to get the government to regulate in support of “trusted” news sources. Led by the CBC, the initiative has succeeded in bringing the Toronto Star, Postmedia, Winnipeg Free Press, La Presse, Le Devoir, and others on board. 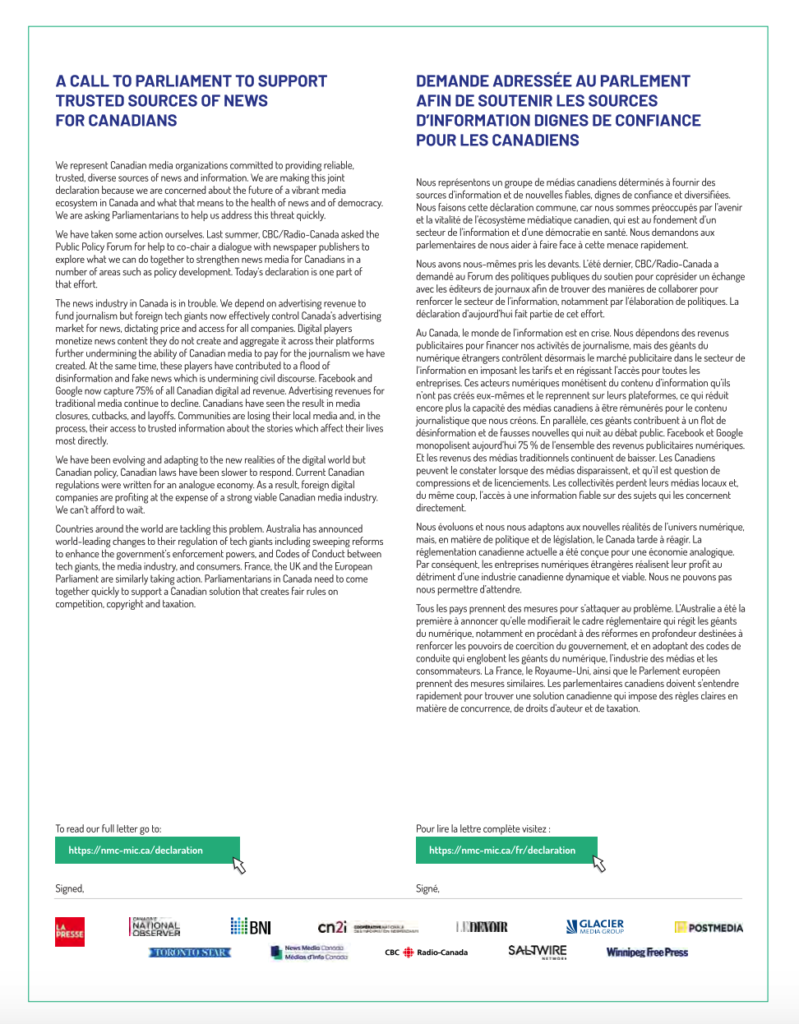 The open letter warns ominously about the impact of Internet platforms and calls on the government to establish “fair rules on competition, copyright, and taxation.” The involvement of the CBC, which over the past two years has supported website blocking, characterized Netflix as a cultural imperialist, and sued the Conservative Party during the federal election, continues to demonstrate that the public broadcaster has lost its way on public policy and the public interest.

The government has already committed hundreds of millions of dollars toward these groups (and over a billion dollars for the CBC alone) with the local journalism fund, tax credits for journalists, and a host of other measures. Yet the CBC and these media organizations apparently want more, including a link tax (which has proven unsuccessful in Europe and was not supported in the Canadian copyright review), new tax reforms that would make Internet advertising more expensive for small and medium sized business, and “competition” reforms that includes more regulation of algorithms and those that operate online.

The CBC and the news media organizations do not spell out how to determine who is a “trusted” news source, but the obvious implication is that they are the ones to be trusted and that the government should move to regulate their online competitors. When combined with the Broadcast panel report, the twin campaigns represent a massive lobbying effort by news and cultural groups (backed by the Public Policy Forum, which released the flawed Shattered Mirror report in 2017) to regulate freedom of expression online, undermine net neutrality, and increase consumers costs. The government should swiftly reject further calls for news regulation to support “trusted” sources as the effort serves as a reminder that all that trusting the CBC and self-interested news organizations on public policy invariably leads to are never-ending demands for hundreds of millions in tax dollars.